Special to the Valley News

An egg-shaped sun rises above a palm tree and sheds its light over the calm morning ocean in the logo of Broken Yolk Café, a new popular breakfast spot in Temecula, especially known for its four-egg omelets and eggs benedict.

“Breakfast is a simple meal,” says Jennifer Babb who, with her husband Oscar, opened the Temecula location in October of 2012. The Broken Yolk Café franchise dates back to 1979 and currently has 11 other locations in Southern California. The Temecula location is the first one in Riverside County.

“Here at Broken Yolk Café we try to keep it simple – all the menu items are prepared in-house from scratch. We don’t use any pre-packaged items, no frozen hash browns here,” says Jennifer. She notes another specialty of the restaurant, the Breakfast Burrito, “Eggs, cheddar cheese, bacon, avocado and potatoes – everything you can possibly want for breakfast, wrapped in a tortilla.” 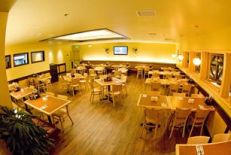 The café’s heavy entry doors open into a spacious seating area, a well-lit bar is situated along one of the walls, four large flat screen TVs grace the walls, while the cushy booths are ready for the hungry guests in the main hall. The fact that there is an ample space between the table and the booth’s bench will come in handy as soon as your order arrives.

We came for lunch after 1:30 p.m. – a good time if one wants to avoid a weekend lunch rush – but a couple next to us was still in the mood for breakfast. Broken Yolk Café serves breakfast during its opening hours of 6 a.m. to 3 p.m.

I was duly impressed with the size of the omelet and hash browns that arrived at their table, after all, “Broad Menu + Ample Portions + Fantastic Service = Loyal Customers,” is the motto of the Broken Yolk Café.

But it was when my husband’s Vegetarian Sandwich arrived that I realized that this place means business. Its glory presented itself on two slices of lightly toasted wheat bread, one of which served as a platform for a mound of crispy alfalfa sprouts covered with a staggering curly layer of shredded jack cheese; while the other side, layered with romaine lettuce was topped with four large tomato rounds and what looked like an entire avocado thinly sliced and uniformly arranged in a fan shape. Served with a pickle, pepperoncini and your choice of French fries, coleslaw or potato salad – this sandwich will definitely keep you going till dinner, and quite possibly beyond.

“An avocado sandwich one would expect from this area of California,” commented my husband appropriately as he proceeded to put the two towering slices together. With a little advice from my daughter whose memories of stacking one Lego tower on top of another with her cousins must still be fresh in her mind, he succeeded at bringing the two loaded halves together and surveyed a truly grand item in front of him.

I am not one for such brave endeavors, and so tomato and basil soup and a green salad with balsamic vinaigrette dressing sounded like a simple yet nutritious meal to me. The soup arrived, true to the Broke Yolk Café’s tradition, in a bowl of a larger variety, and the first slurp of its smooth creaminess confirmed that I will be coming back again soon for lunch. Be sure to ask for a side of the Café’s croutons – their savory crunch balances well with the silky texture of this great soup. 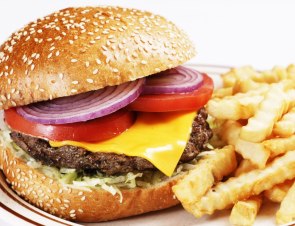 My daughter opted for the cheese enchilada platter. Exhausted after a morning at Rock Fitness gym she dug in immediately, her only comment being, “Spicy and good!” Then we lost her as she worked her way around her sizeable plate – mixing up bites of cheese-filled corn tortillas covered in thick enchilada sauce with fluffy Mexican rice and home-made refried beans, which, by the way, are lard-free and made in-house – simply sautéed beans, onions and salt.

“Epic sandwich!” announced my husband when a quarter of his meal was still on the plate. Although he is not the type to shy away from large servings, I doubt that his picture would be adorning the Broken Yolk Café’s Wall of Fame any time soon. A challenge to true champion eaters, Broken Yolk Café Special was featured on the Travel Channel’s Man v Food. A gargantuan dozen-egg omelet that is filled with mushrooms, onions, American cheese, and smothered with chili…and more cheese comes with a generous serving of home fries and two biscuits; it is not for the faint of heart. The Special is free…if you can finish it in less than one hour. For now, though, the Wall of Fame bears only the picture of smiling Adam Richman, the show’s host.

Next month Broken Yolk Café plans to introduce new menu items such as South of the Border Benedict with Carne Asada, as well as Chicken and Waffles and a few other items. The Café gets busy during breakfast and lunch times, so if you’d rather not fight the crowds, plan to come before 9:30 a.m. for breakfast and after 1:30 p.m. for lunch. If you can make it before 8 a.m. you can get one of the entrees off the Café’s $4.99 Early Bird Special Menu. On weekdays, Broken Yolk Café’s Lunch Special comes with a choice of one of the five entrees for $7.99 and includes a drink.

Broken Yolk Café is also a great place to host your next social gathering. There is a private sound-proof room with seating for 80, but it can be divided, if needed, into two separate smaller areas – so consider this for your next sales meeting, church social, rehearsal dinner or baby shower. A large flat screen TV that is mounted on the wall has HDMI ports for your laptop if the occasion requires it. Inquire about fixed price menus for large parties.

You can look up the Broken Yolk Café’s menu online, but beware – the sizes of the plates that passed by us were not to be taken lightly. One entrée could easily feed a party of two. And if your party is large, get a booth in the corner, make some good selections and remember that your mom taught you to share! The portion sizes here could easily warrant an installation of a lazy Susan at the larger booths!

“Have a sunny day!”  Broken Yolk Café’s cashier bids farewell as we step out into bright Temecula sunshine.